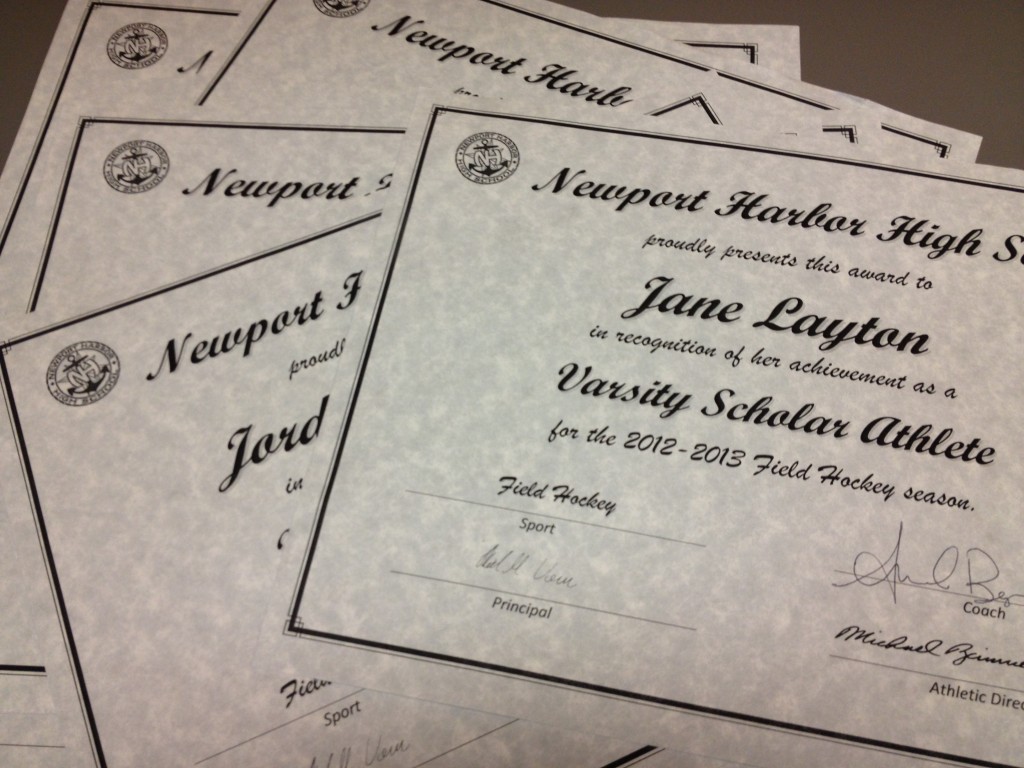 Congratulations to the Varsity players who were recognized for their achievement as a Varsity Scholar Athlete for the 2012-2013 Field Hockey season.

Newport Harbor Varsity Field Hockey traveled to Moorpark College to play their last pre-league game against Louisville. After a hot game on the turf field, the Sailors ended with a 4-1 victory. Three goals were scored by Taury Hlinka, with assists by Jill Messersmith and Kirsten Rohan. The fourth goal was scored by Kari Hancock assisted by Kaitlin Shedd and Jordan Blanchfield. Goalkeeper Cailynn Smethurst had five saves. Newport begins league play on Monday at home against Westminster. Go Newport!

Newport Harbor Varsity Field Hockey will be returning to Chula Vista on Saturday to compete in the second round of the Otay Ranch Tournament. Newport won all three of their games this past Saturday to place them at the top of their pool.

Click here to see the bracket breakdown. The last possible game time will be at 1:00 p.m.

The Newport Mesa Unified School District Board of Education would like to invite you to the School Board Meeting on January 10th to recognize your successful season. Keep your eye out for an invitation in the mail.

Newport Harbor Varsity Field Hockey plays in the second round of the Otay Ranch Field Hockey Tournament on Saturday.

The team will depart for Chula Vista on Friday at 2 p.m. and will be staying at the Best Western Plus in Chula Vista. The first game is at 8 a.m. against Canyon Crest on Saturday. The rest of the day will depend on the result of the first quarter-final game. To download the bracket, click here.

If there are any parents who are willing to help drive down on Friday afternoon, please contact Coach Amanda Boyer as soon as possible.

But second-year Coach Amanda Boyer knows that her team, which scrimmages Bonita at 3:15 p.m. Tuesday at Newport Harbor before opening its regular season Thursday at Harvard-Westlake, refuses to rest on its laurels.

“We’re a new team, and they want to make this season about this new team and not about defending championships,” Boyer said. “They want to reach their full potential, and if a championship is at the end of it, then that’s great. When I asked them what goals they wanted to reach, it was to reach their full potential and finish strong as the Newport Harbor field hockey team of 2011. That impressed me … as much as I would love for them to continue the legacy that [former coach] Devon Kelly started and that I got to continue on with last year, I’m really trying to tell them that it’s not about that. It’s about reaching their potential as a team.”

Still, it’s difficult replacing graduates like goalie Sydney King, the Sunset League Most Valuable Goalkeeper a season ago, and Stephanie Storch, the league’s Most Valuable Midfielder. They helped the Sailors win the TOC, Sunset League, Orange County Tournament (co-champions) and Highlander Cup. It was the first time Newport Harbor had won all four since Boyer played in 2003.

The most experienced returner is senior Courtney McIntosh. She’s a third-year varsity player who earned all-tournament team honors last year after helping the Sailors defeat rival Huntington Beach for the third straight year in the TOC title match. Boyer said McIntosh, a first-team all-league player as a junior, played “stopper” as a center defender in 2010. This year she will move up to center midfielder.

McIntosh will be joined at the center midfield spot by another senior and returning starter in Sophie Evans. The second-team all-league selection scored last year in the TOC title match, a 2-1 victory.

“She scores for us but then also does a really great job at defense,” Boyer said. “She and Courtney are going to be kind of our key players in the middle, controlling the field.”

Allie Pantoskey and Alex Chandler are threats from the forward position. Boyer said Chandler has generally been a midfielder, but her strong shot will help the Sailors.

Emily Mitchell, Madison Wooters, and Kelly Kindgren are also returning varsity players in the midfield, as are Nicole Zielinski, Jane Layton and Kellie Conant on defense. Layton is a junior; all of the other aforementioned players are seniors.

Senior Andie Ward steps in at goalie after the graduation of standout Sydney King, who helped lead Newport to the title each of the previous three years. King is now playing Division I in college at Louisville.

“Andie’s got some great shoes to fill, but we’re excited to have her as our last line of defense,” Boyer said. “I think she’ll step up to it.”

This year the Sailors’ home matches will be played at Davidson Field on campus, instead of Harper Elementary School. Boyer said the players are understandably excited about the switch.

“It’s going to bring more awareness to their games,” she said. “I think it also makes them feel a stronger sense of school pride, because they are in the stadium. They get to be on campus hosting these games, instead of off campus at a school that isn’t even their own.”

After playing at Harvard-Westlake on Thursday, the Sailors travel to Chula Vista for a new tournament for them — the Otay Ranch Invitational — beginning Saturday. Boyer said the 18-team tournament should benefit the Sailors in that they’ll face some different teams, after winning the Highlander Cup each of the past two years.

“We just wanted to expand our experience,” Boyer said, and it made sense.

The Highlander Cup in San Diego is coming quick! The Varsity team is heading down south for their second appearance and to defend the title at the Highlander Cup at Helix High School. The games will be on Friday, October 15 at 5:00 p.m. & Saturday, October 16 @ 8:00 a.m., 12:00 p.m., and with a chance of 3:15 or 4:15 p.m. (playoffs) and 5:30 p.m. (championship). We will need a parent drivers for transportation. Please let Amanda know if you would be willing to help drive.

Accommodations have been made for Friday night, October 15. The team will be staying at the Holiday Inn Express on Murray Drive in La Mesa. We have blocked off rooms for parents to make reservations. The reservation is under Newport Harbor Field Hockey and the rate is $93 per room. You will need to call Holiday Inn to reserve a room. If you have any questions, please feel free to email us at newportharborfieldhockey@gmail.com.