After a hard fought and well played game, Newport Harbor Varsity Field Hockey lost 0-1 to Harvard Westlake in the Tournament of Champions Semi-Final game. The Sailors will compete against Bonita HS for third place at 4:30 p.m. on Saturday, November 3 at Edison High School. Come support the team! Go Newport!

Congratulations to Newport Harbor Varsity Field Hockey for their 2-1 win over Glendora High School on Tuesday. Goals were scored by Chloe Bagiu and Lindsey Blanchfield with an assist by Grace O’Neill.

The Sailors advance to the semi-finals with a game on Thursday, November 1 at 5:00 p.m. at Harvard Westlake High School. Come show your support and cheer the girls on! JV and Frosh/Soph players are welcome to come on the bus to and from the game. Bus departs from NHHS at 1:45 p.m. Let a coach know if you would like to ride the bus by noon on Thursday.

As seen in the Daily Pilot: 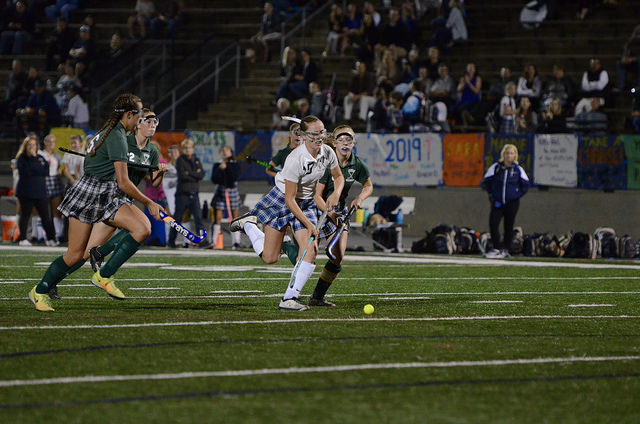 The home crowd grew restless as the Newport Harbor High field hockey team went into halftime locked in a scoreless tie with Edison on Tuesday night.

It was not the effort of the Sailors that they took issue with, but rather a call that had just been made.

Goals can be hard to come by in field hockey, and Newport Harbor had just had one taken away. Grace O’Neill appeared to have opened the scoring on the Sailors’ senior night, but the officials ruled that the ball did not clear the semicircle before O’Neill unleashed a slap shot on a short corner.

The Sailors went back to work in the second half, and in no time, the Sailors got the go-ahead goal.

Chanse Hill and O’Neill scored goals, and Newport Harbor came away with a 2-0 victory over the visiting Chargers in a Sunset League South game.

Newport Harbor finally broke through in the 33rd minute. Natalie Williams won a one-on-one battle as the Chargers tried to head up field. The ball rolled ahead to Hill, who evaded Edison goalie Mary Smith and swept a shot into the net on her backhand.

“It was really special because we got a goal taken away,” Hill said. “We had a goal that was past the line, and the ref didn’t call that. To finally get our team in motion into the game, it felt really good and got us more pumped up.”

The Sailors dominated possession and the scoring chances, earning 11 short corners while conceding just one.

After having a goal taken off the scoreboard at the halftime buzzer, O’Neill got some good karma when she converted her final opportunity with eight seconds remaining. She received the pass from Sara Robinson, the Sailors’ injector, and her hard shot rolled in.

“You can’t really control what the refs are going to do,” O’Neill said. “Those things are just out of our control, so I think the important thing was that we got right back into it, even though it was really disappointing, until we were able to get one that actually counted.”

More importantly, Newport Harbor won, moving its record to 19-4-1 overall and 10-1 in the league. The Sailors came into the night tied with Huntington Beach for first in the league with two games to go, and they are seeking their first league title since 2010.

“That’s one of the struggles that we’ve had is that during league, we’ve worked out all our kinks, and then we really, traditionally, have then shown up in Tournament of Champions,” Sailors coach Amanda Boyer said. “It would be so nice to get…a higher seeding and have a little bit more of an advantage going into playoffs.”

Smith made 10 saves to keep the Chargers (8-3 in league) in the game. Arleigh Ramsey and Madeline Solorzano also collapsed well on defense to help Smith defend a myriad of short-corner opportunities for the Sailors.

“I just felt like we were getting a little too panicky and frenzied with their attack if the calls didn’t go our way,” Chargers coach Rebecca Antongiorgi said.

Antongiorgi also praised Solorzano, a center back, saying, “There were a few times where she just came out of nowhere and just saved us.” 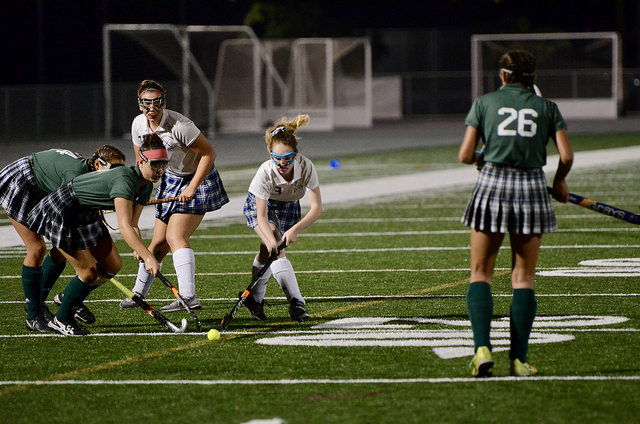 Newport Harbor Varsity Field Hockey faced Bonita at home on Tuesday. Chanse Hill scored in the first half with an assist from Chloe Bagiu. The Bearcats tied up the game in the second half for a 1-1 final score. The Sailors travel to Glendora on Thursday. 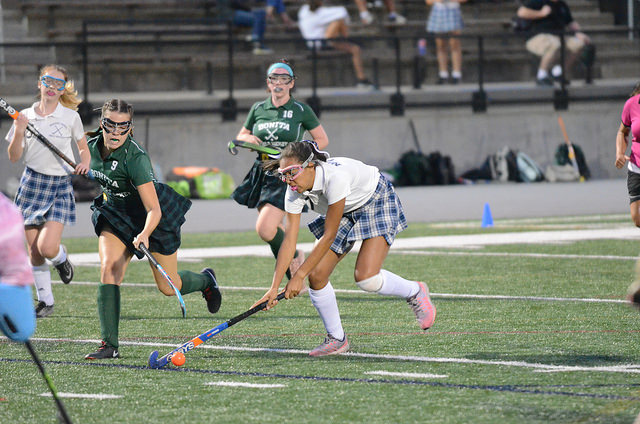 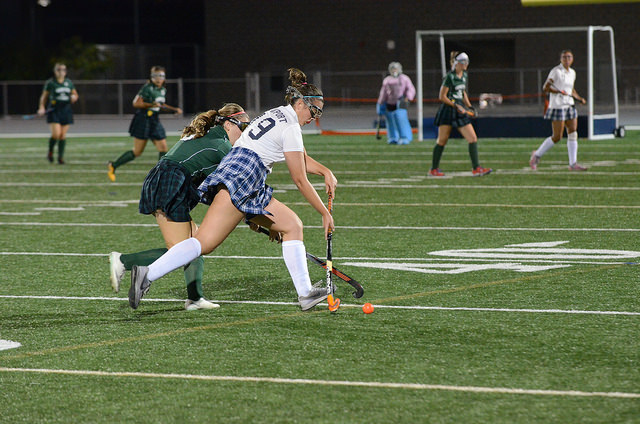 Newport Harbor JV Field Hockey beat Bonita 1-0 with the lone goal score by Zoe Bixby. Defense certainly worked hard to keep the goal out of the cage for the shutout! 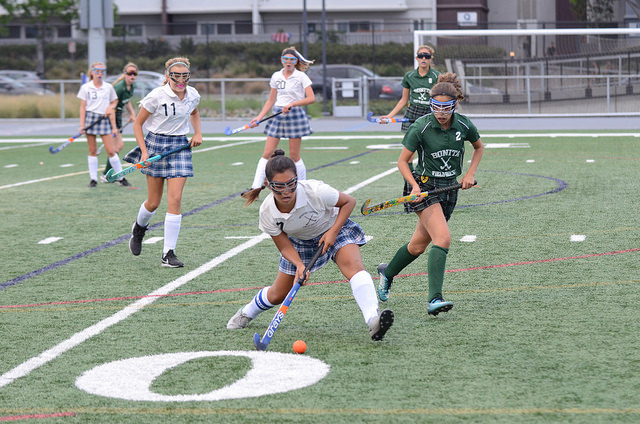 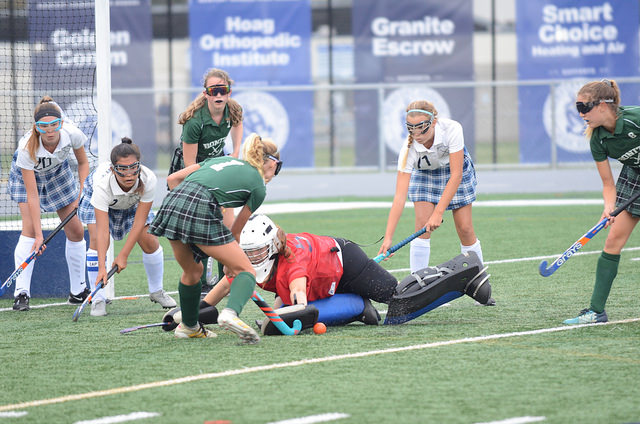 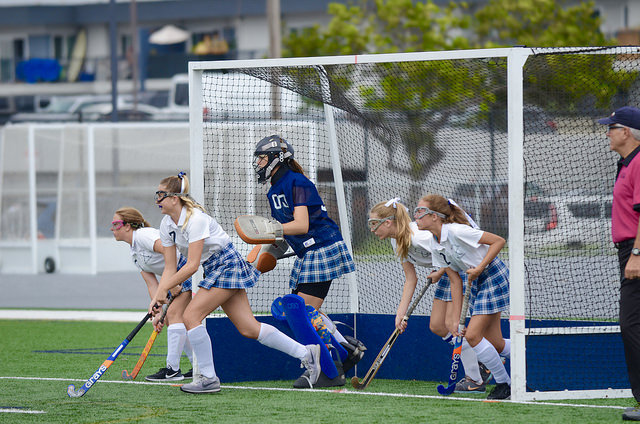 As seen in the Daily Pilot High School Roundup:

Newport Harbor returns to action with a home game against La Verne Bonita on Sept. 4 at 7:00 p.m.

______
Newport Harbor Junior Varsity Field Hockey also had a victory over Chaminade on Tuesday. The Sailors won 3-0 with two goals scored by Kaycee Kontra, and another by Lana Burns. Goalkeeper Abby Watson had one save and Camryn More had three saves. Go Newport! 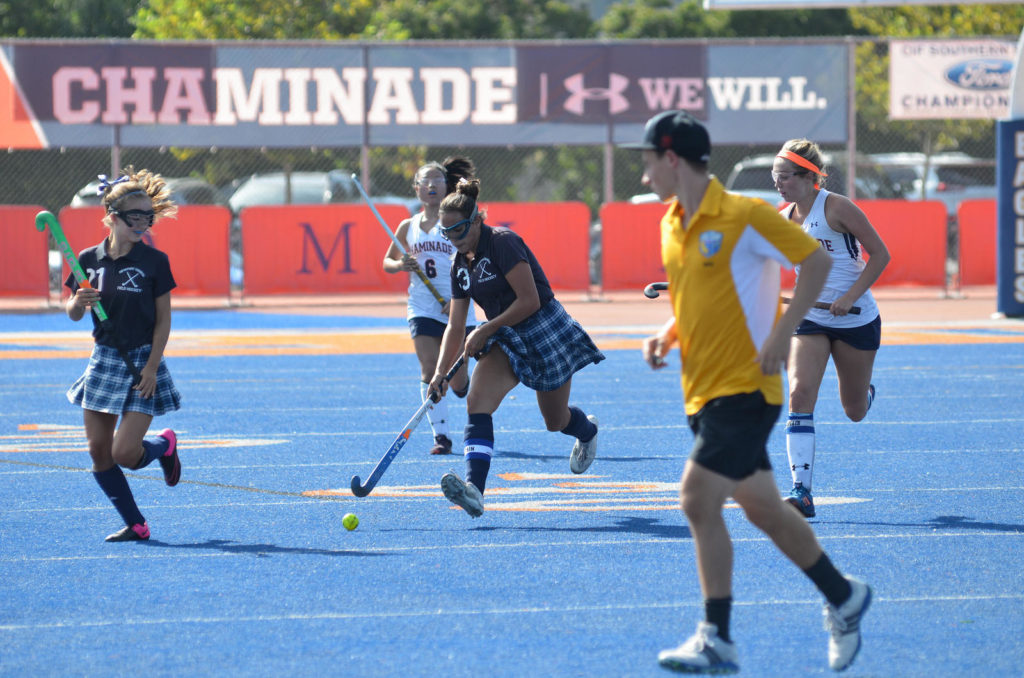 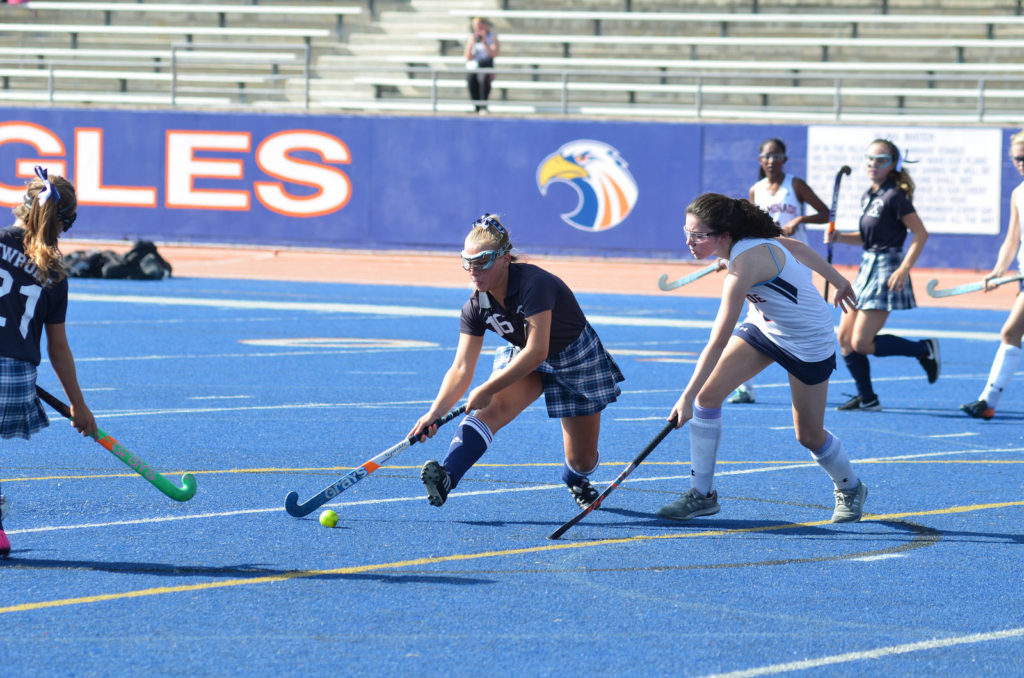 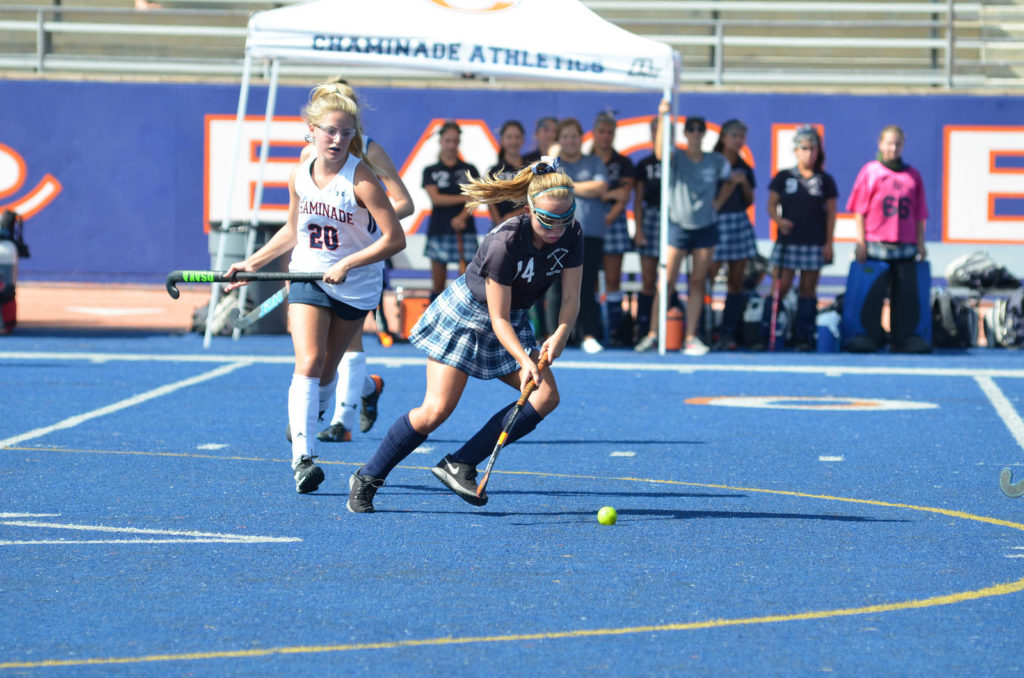 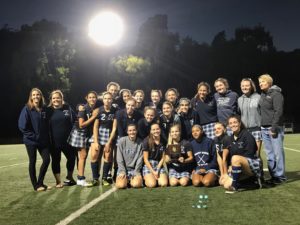 From the Daily Pilot –

The Sailors were looking for their sixth title in the last 10 years, but they ran into this year’s most-dominant team in the Los Angeles Field Hockey Assn. Tournament of Champions final.

Alyse Tran scored the game-winning goal with 10:04 remaining. The senior injector, the initial passer on short corners, jumped into the play after delivering a pass to Rachel Brown.

Brown pushed the ball past a Newport Harbor defender, driving the action closer to the Sailors’ net. Astor Wu sent a pass from the right side of the net in front for Tran, who was able to get her shot past Sarah Sheldon.

“I was absolutely, utterly elated,” Tran said. “It’s crazy because for all of the four years that I’ve been at Harvard-Westlake, this is the one thing that I stayed true to and committed to for the entire four years.”

Sheldon, a four-year varsity goalie for Newport Harbor (18-8-2), made six saves in the match. She made a huge stop on Brown, the tournament MVP, with three minutes to go as she sprinted in on a breakaway.

The Wolverines (20-0) were relentless, though. Wu crashed the net and scored on Harvard-Westlake’s next possession to put the game out of reach.

Newport Harbor broke through to start the match. A crowd of players pursued and batted the ball in front of the net. Kate Davison was the last of four to take a swipe at the ball, driving it past Wolverines goalie Elly Choi for the game’s first goal in the third minute.

Wolverines coach Erin Creznic, who called the undefeated campaign a “once-in-a-career season,” said that Choi had not been scored on all year.

“I couldn’t be any more proud of the way that they played,” Sailors coach Amanda Boyer said of her team. “Their first half of this game was incredible. Scoring the first goal in the beginning was very exciting.

“The girls really played the best that they have the whole season.”

It was Harvard-Westlake, however, who controlled possession throughout. The Wolverines drew six short corners to Newport Harbor’s three before the break.

Nicole Bahar tied the game on the last short corner of the half for Harvard-Westlake in the 24th minute. Tran was the injector, and Mia Reilly drew the assist in taking the initial shot before it was deflected past Sheldon.

“They’re a short-corner powerhouse,” Boyer said. “They play in the circle for a corner because it clears out all the defense. Then you’re only up against three defenders and a goalie. It’s a huge advantage.”

Also in the Tournament of Champions:

Stella Ziegler scored on a redirect off a penalty corner with 8:27 remaining, and Huntington Beach topped Glendora 1-0 in the third-place game.

Nicole Cramer had three saves in the shutout for the Oilers (18-4-4, 9-0-1), who were the Sunset League South champions in the regular season.

Huntington Beach was forced out of the winner’s bracket by Newport Harbor. The Sailors beat the Oilers 1-0 in the semifinals.

Newport Harbor Varsity Field Hockey had a big win on Thursday against the Oilers at Huntington Beach High School in their TOC Semi-Final game. The Sailors won 1-0 with goal scored by Chanse Hill and assist by Kate Davison in the second half of regulation time. Goalkeeper Sarah Sheldon recorded eight saves. Newport faces Harvard Westlake on Saturday for the Championship game at 5:00 p.m. at Harvard Westlake. Go Newport! 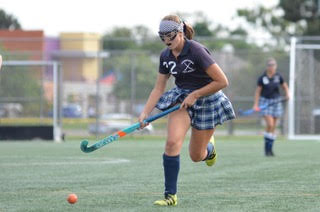 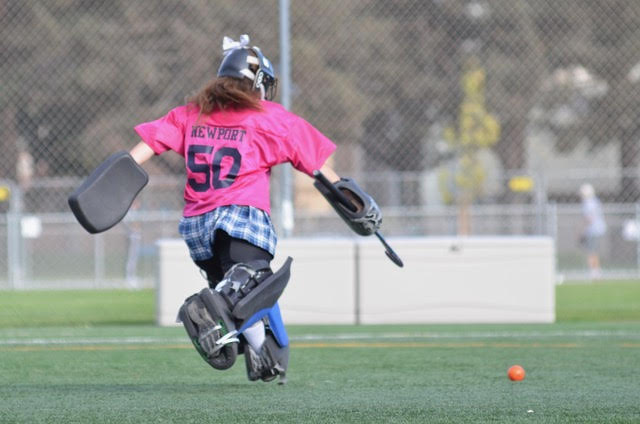 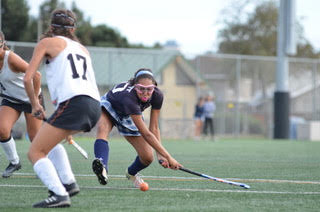 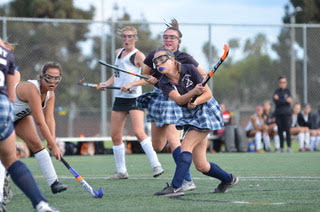 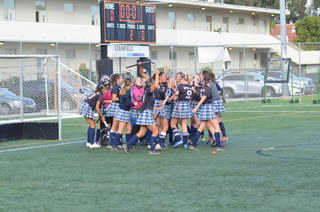